Somewhere in the relief of cooler weather, the urgency of shortening days, and the beauty of the coming fall, is the drive to find a gradual slope and smooth descent. The only thing left to do is plan the ride. As a regular cyclist and a new North Carolinian, I looked through some of the tools I’ve previously used to plan new routes to see what they said about biking opportunities nearby. These are methods that can be used across the country for finding good local biking, or for getting more information to plan larger trips.

First, I checked into Strava, which bills itself as the “Social Network for Athletes.” This is a program that tracks and analyzes runs and bike rides, allowing athletes to share their routes and engage each other in friendly competitions. Weekend warriors, early morning runners, casual afternoon cyclists, and others regularly upload their adventures, complete with distances and times. Popular segments become sources of competitions, with people traveling out to them specifically to try for the best time on that stretch of road. Even better than that, because the information is tied to GPS devices, this tracking generates a whole host of mapped information that Strava is increasingly making more accessible.

One example of this is the Strava Heatmap, which represents every ride and/or run generated in a given year with colorful lines. This is, of course, a function of local density and individual affluence to a certain degree, but it is also a visual representation of locals’ knowledge. Because cyclists naturally gravitate towards comfortable roads in their given area, those that are friendlier to cyclists – smoother paving, wider shoulders, slower speed limit – get more use, and their path grows more brightly.

Strava bike heatmap for the US in 2015. Photo Credit: Strava Labs

To get a better idea of my locality, I zoomed in to see where people were riding the most within the Triangle. I adjusted the color to find the balance that was most clear for the scale of the map, and was instantly able to pick out darker threads. I checked them out further, and picked out a number of trails, as well as a ride out of Chapel Hill that I was familiar with in part because it had an ice cream shop along the way.

These tools are useful for working on multi-day routes as well. My friend and I have been considering the idea of taking time for a longer ride in the early Spring, so I opened up the possibilities for throwing my bike on the back of the car and starting a ride further away from home base.

In this instance, I had a starting place in mind. Because I had heard good things about it, I took a deeper look into the Blue Ridge Parkway. Google maps is a great starting point to get an initial idea for what a trip might entail. So, I simply let google maps fit a recommended bike route along the roadway. Very quickly, I got a snapshot of ride, which clocked in at 470 miles with just north of 45,000 feet of elevation gain. 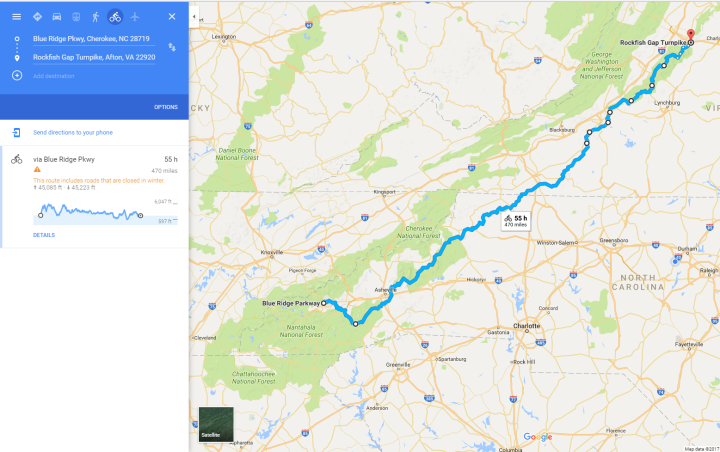 Google Maps showing a distance and time estimate, as well as a small elevation profile for a bike route. Photo Credit: Google Maps

If it seems unlikely that you will able to find the time for a bike trip of that magnitude anytime in the near future, you’re not alone. These tools can be applied to breaking down and analyzing shorter segments. Here, I started to look into the options for taking on a two-four day adventure. I picked Asheville as a home base, and checked back into Strava. I used the “Segment Explore” tool to see what was popular and the area, and I quickly zeroed in on one hill in particular:

Mount Mitchell, the highest peak east of the Mississippi, is only a few dozen miles east of Asheville, and has a tie in to the Blue Ridge Parkway. It’s a brutal climb, with over 1,300 feet of vertical elevation gain, and some intensely steep sections. 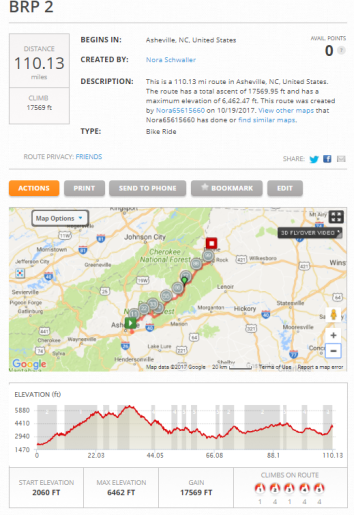 These are tools that anyone can visit or sign up to use for free. Whether you’re planning your first ride, or your 100th century (a 100 mile ride), these programs can give you a well-documented idea of the route and everything it entails. Furthermore, comparing new routes to familiar ones is an easy way to get a quick snapshot of an upcoming, unknown ride. Prepare well, ride safe, and have fun.

About the Author: Nora Schwaller is a first-year Ph.D. student in the Department of City and Regional Planning, where she focuses on disaster recovery. Outside of class, Nora enjoys long bike rides and short walks, delicious food with good people, and casually perusing the design history of contemporary video games and systems. Prior to UNC, Nora worked in the architectural field in the San Francisco Bay Area.