I was sitting on a Chicago Transit Authority bus, a fitting location to receive the news, when I learned that our team of Department of City and Regional Planning students won an honorable mention in the Urban Land Institute’s Urban Ideas Competition. The contest’s prompt: design and render a 45 acre greenfield site adjacent to a nearly complete light rail transit stop in suburban Charlotte, North Carolina. Of the ten teams that entered the competition, DCRP’s was the only student-led team to be distinguished with an award.

In late January, we formed our team with minds representing our department’s strengths, transportation specialists, two trained architects-turned-planners, undergraduates with a focus on urban design, and experts on parks fully rounded our eight person lineup. Each member was an asset to the project who delivered a product they are proud of.

The site we were assigned to reimagine is ubiquitous in suburban sprawl: the tract of forested land that was mysteriously once lived on (we found brick and concrete foundations here and there) but now contained only empty liquor bottles and rubber tires. But the site’s natural elements, namely the creek bisecting the tract parallel to the adjacent arterial street, meant our design decision had to marry the built and natural environment. This conclusion is how we settled on the concept of OPEN at University City Boulevard Station (see link for full description and justification of our site plan).

Our proposal was a product of late nights, settlements and compromises, and perhaps most importantly the coordination of our team’s talents. I was honored to represent our team and accept our Honorable Mention at the Annual Conference of the ULI Carolinas. It was also an eye opening experience as a student of urbanism to learn how fields outside of city planning, especially investors and architects, related their fields to the competition. I was disheartened that the winning team chose to include 1.5 parking spaces per dwelling unit, but the economic reality of an auto-centric suburban form meant that this over-provision was most economically viable. 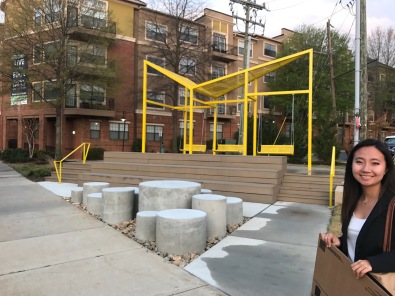 A nice public space nestled near a transit-oriented development in South End, Charlotte.

The Charlotte skyline at daybreak.

This summer, I am excited to further explore Charlotte’s light rail system as part of a research project in urban design. This competition is a prime example of the value of understanding the priorities of stakeholders in the built environment, and the primacy of navigating them in a way that promotes the ideas you want to be reflected in cities you work to redefine.

Brian Vaughn is an undergraduate and minors in Urban Studies and Planning. This summer, he will spend three weeks in South Florida, Charlotte, and Atlanta conducting a public life study around transit stations. His favorite transit oriented development is Union Station in Washington, DC.