In the Town of Carol-Blue, Donny, a local community developer, finds himself in a really tough position: both the county and city budgets are constrained and the economic challenges facing the town seem only to grow. After performing an analysis of senior housing demand, he realizes that the stories he has heard from friends about their tough time finding housing for older loved ones are not isolated incidents. He also read in the paper about significant needs his town has to address, such as housing veterans and the lack of resources socials services has in supporting foster children and their adoptive families. Typically, he thinks of these problems as unrelated but he happened to read an article about a non-profit called Generations of Hope. The non-profit helps in developing communities of intergenerational housing with the purpose of helping to alleviate pressing social problems. Could this be a solution in addressing multiple Carol-Blue challenges at once?

Generations of Hope is a non-profit community development corporation that specializes in facilitating the development of specialty intergenerational housing. Generations of Hope (GOH) began its mission in 1993 through its first planned community, Hope Meadows.  Hope Meadows was provided a one million dollar grant from the State of Illinois to purchase and redevelop a 22-acre former military base that would go on to include both senior apartments and housing for foster families. In this housing model, foster children are adopted by foster parents and are given support by seniors. In exchange for below market-rate rent, seniors volunteer six hours a week with foster children, performing various tasks such as tutoring, playing games and helping with other child care services. 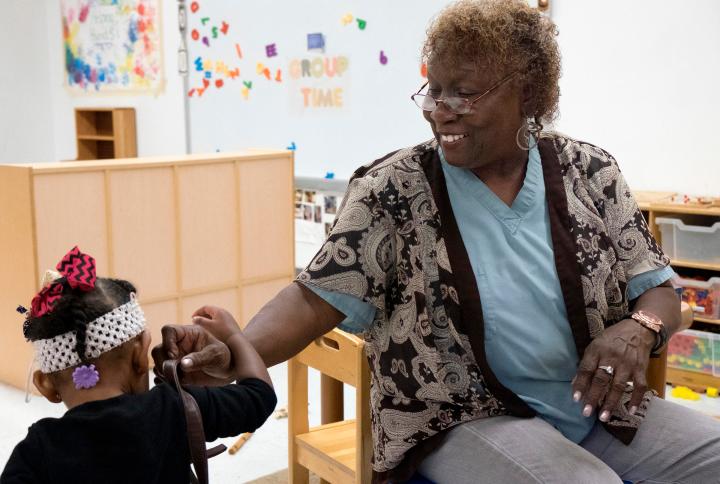 In the first deployment of  GOH’s housing model, the organization sought to address child welfare and senior quality of life from a perspective that contrasts to what it calls the “philosophy of residualism“; a perspective that pervades traditional methods of care and treats both groups as liabilities. Instead of seeing foster kids as victims of circumstance and seniors as victims of age, both groups are seen as agents of change in the world around them. Foster children need stable environments. Seniors aid in healing children experiencing the pains of instability in this housing model by providing a sense of community, by being a constant in a child’s life, and by helping foster parents address issues that are new and unexpected. On the other end of this relationship, seniors who rent in this community not only gain a sense of purpose from their help with both foster children and parenting, they establish meaningful relationships that happen as a result of intentional programing from community staff, contributing to an overall healthy and positive quality of life.

Generations of Hope has grown a lot since 1993 and so has the adaptability of its model. Right now, there are at least five operational communities using this model and more than a dozen in planning or development. One operating community in Washington D.C. known as Genesis has taken the original GOH development model and adapted it for teen mothers aging out of the foster care system. In New Orleans, the model is currently being adapted to aid Iraq and Afghanistan veterans with traumatic brain injury, along with their families, in a development called Bastion.

In many ways, GOH development projects are similar to those typical to the housing industry. According to Mark Dunham, External Affairs Counsel for GOH, the fundamental components of the model when adapting it in any community can be broken down into four components: people, purpose, property, and resources. The right people have to be in place at the beginning of the project who have the capacity to make the project work. This includes developers, community stakeholders and/or representatives of various agencies. The community being planned must have a specific purpose or goal it aspires to achieve. Does the community aim to help with veterans’ health issues or is it aimed at alleviating the pains of instability faced by foster children? The property for the development has to be  available. A challenge for these projects can be financing–and the property has to be attainable within the total cost for the project. Also, because of development cost, multiple and diverse resources are needed for financing the project. The project has to be financially feasible.

The costs for such projects are often funded through many financing methods.  The Bastion project, one of the largest communities adopting the GOH model, has a total development cost of about $18 million. It will be constructed in two phases and, when completed, will include a mix of 60 rental apartments and 78 homes for sale. According to an article in the February 2016 issue of Tax Credit Advisor, funding sources for phase one of the project included $3 million in Low Income Housing Tax Credits equity, a $2 million loan from Caption One, $1.5 million from the State of Louisiana through HUD Home funds, $800,000 from the City of New Orleans through HUD Home Funds, as well as money from private grants and donations. The funding sources for phase two mirror phase one. In all, permanent debt represents 35% of the funding structure, Home sales 20%, and Tax Credit Equity 19%. The last 26% gap was met with a capital campaign (22%) and another subordinate loan (4%).

Though the Bastion project is atypical in size for this housing model (typical projects with this model are about 45-50 units and the Bastion will be 78), its development shows how tricky it can be to make projects like this happen. Regardless, the payoff, though hard to measure, has the potential to change lives. Currently, according to Dunham, the high school graduation rate for adopted children in the first community is 100%. Though the economic impact of this one statistic is unknown and hard to measure, it has positive implications for the cost of future social problems associated with high dropout rates, such as homelessness and high incarceration rates. Generations of Hope is currently working on ways to quantify the impact of the model to demonstrate, with outcomes, that this model positively affects both residents and tax-payers alike.

In summary, Generations of Hope uses the intentional neighboring of community-oriented seniors to help tackle local community challenges. The model co-locates untapped human capital to help mitigate the need for professional services. By bringing people together from different age cohorts, a community’s capacity to face tough challenges is increased. These projects require the right people at the table, united in a common purpose and with the connections and resources to make it happen. Financing is a challenge for these communities but when the residents of these communities win so does the local government and other contributing agencies.

Jonathan Peterson is a second- year master’s student in the UNC Department of City and Regional Planning and is a Community Revitalization Fellow with the Development Finance Initiative.